The mission of the Rye Foundation is to make a life-changing impact on North Carolina children
by providing grants in the areas of Religion, Youth, and Education.

News from the Rye 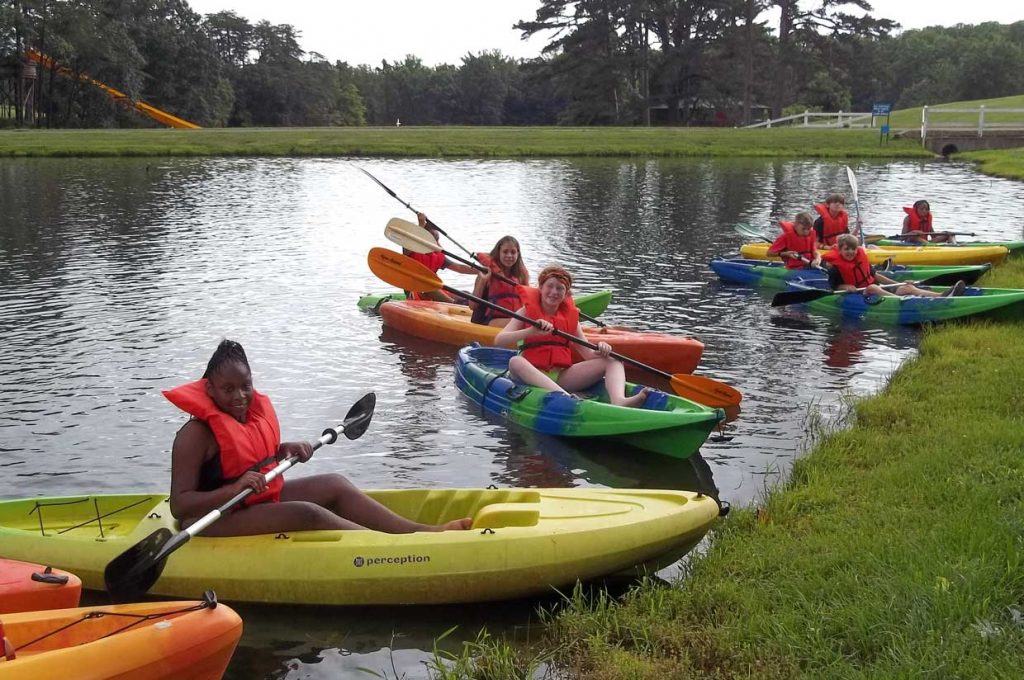 From a distance, the picturesque, pastoral setting almost seemed to portray a normal day at summer camp.

Children walked from the morning chapel service toward a calm lake, where canoes and kayaks awaited. In the distance, others moved quickly to arts and crafts activities.

However, the day was anything but routine for the 238 boys and girls who attended Camp Corral, held at the historic YMCA Camp Hanes in King, North Carolina.

One important factor set this summer camp apart: every participant came from a family that had a parent wounded or killed in battle.

Several of the attendees were able to participate due to generous scholarship funding from the Rye Foundation. Two of Rye’s priorities are offering support to children of prisoners and children from military homes.

“This is a very special week,” said camp director Val Elliott, “and we are thankful for the Rye Foundation and its financial commitment to these children.”

During a recent site tour, leaders of the Foundation visited with children and staff members, attended the chapel service, and enjoyed lunch in the dining hall.

A daily highlight is seeing the boys and girls gather at the flagpole and recite the Pledge of Allegiance.

The informative site tour was part of an ongoing strategic plan to observe quality programming that is “making a difference” in the lives of North Carolina children. Other tours have been to Camp Vandemere near New Bern, Kamp Kiwanis in Lexington, Cale Camp in Hertford, the Mount Sinai – McCreary Community Center in Catawba, and the beloved Presbyterian Orphanage in Black Mountain.

We have received numerous positive comments about the March issue of Forsyth Family magazine, which contains an in-depth feature article on the philanthropy of the Rye Foundation. It is titled, “Making a Difference in the Lives of Children.” Three of the first to offer their congratulations on the coverage were a Presbyterian minister, the former district governor of Rotary International, and the president of the Winston-Salem Chamber of Commerce.

One of our recent charitable gifts went to Camp Hanes in Stokes County. Each summer, the camp hosts a specialized week, and every child who attends has had a parent wounded or killed on the battlefield. Last year, a total of 265 children participated. Plans are being finalized for a site tour this summer.

When the Rye Foundation was established, our very first gift was $25,000 to the Billy Graham Training Center for its youth camp. Soon thereafter, Warren Steen had the privilege of introducing Mr. Graham to each member of our Board of Directors, and he thanked each one personally. A photo of that event hangs in the foundation office, and reminds us all of his lifetime of Christian service.

Author Bob Buford was right. He wrote that many of us spend years and years in a search to be successful. Then, we evaluate our priorities and seek to become significant. What kind of legacy do you plan to leave ?

TABOR CITY - Friends and supporters recently gathered in Columbus County to break ground on a 5,160 square foot building which will provide overnight accommodations for family members who are visiting relatives at the adjacent prison facility.

Visionary leaders are building the Matthew 25 Center within sight of the Tabor Correctional Institution, home to 1,750 prisoners.

Funded by area citizens, churches, and businesses, the Center is designed to provide a place of shelter and retreat. Architectural plans include a dining area, playground for children, and four hotel-type rooms.

The Rye Foundation has made an investment of $10,000 in the project.

Burnett Coleman, a retired banker who led the fundraising drive, explained the primary purpose of the Center in three words - maintaining family relationships. “We believe it is important for children and other family members to have ongoing contact and dialogue with the inmates,” he said.

Warren Steen, the President of the Rye Foundation, attended the groundbreaking and left with a great appreciation for the supporters in southeastern North Carolina. “These leaders really understand that when a prisoner comes to Tabor City, their family is in crisis,” Steen said. “And they realize that the children need extra encouragement and support, so they can choose a different path in life.”

Steen referenced a report issued by the Annie E. Casey Foundation. It showed that 179,000 children in North Carolina had experienced separation from a parent or step-parent due to incarceration. He said that the Rye Foundation has funded other projects aimed at helping prisoners’ children in Burgaw, Taylorsville, and Winston-Salem.

Young Life on the Crystal Coast

This year, Christmas came a few days early for a Carteret County organization.

The Rye Foundation announced the very first recipient of its Ray Bryan Award. The winner is Young Life on the Crystal Coast. The award recognizes a North Carolina charity for “making a positive impact on children and youth.”

In addition to receiving the prestigious award, the organization will also receive $25,000 to enhance and expand its programming.

“This is a great surprise and also a great honor,” said P.J. Barclay, who serves as area director of Young Life. “We promise to use the funds to increase our ministry to students in the area.”

Warren Steen, the President of the Rye Foundation, explained that the charity aggressively seeks out North Carolina projects in the areas of religion, youth, and education. “There’s no Mr. Rye or Mrs. Rye at our foundation,” he said, “but we do have a lot of people who care deeply about helping children.”

According to Steen, the award is given in memory of Ray Bryan, a Goldsboro businessman and philanthropist who was actively involved with the Rye Foundation from its establishment in 2001 until his death. He died on March 30, 2016 at the age of 84.

Led for several years by volunteers, Young Life on the Crystal Coast brought Barclay on board as its first staff member in June of 2016. The organization provides Bible study, summer camp, and weekly outreach events at three area schools. Nationally, the ministry is involved in over 6,900 schools and other locations.

According to Barclay, the funds will be utilized in four areas:

The Rye Foundation has earmarked a total of $100,000 to honor the legacy of Mr. Bryan. “Our philanthropy will be directed at organizations that see the God-given potential in each child,” stated Steen.

Other groups in Eastern North Carolina have been the beneficiaries of Rye funding in previous years. These include: the North Carolina Baptist Assembly at Fort Caswell, Camp Albemarle in Newport, the Matthew 25 Center in Burgaw, and Camp Cale in Hertford.